October at a Glance

Hello Design Families.  Here is our new “Month at a Glance” installment on the blog that highlights significant events on campus.  We will still be sending out weekly updates in addition, but this will give you a chance to mark your calendars early!

Information about Student Led Conferences should have been sent home with students, but we will also post on the blog later this week should you need to reference anything. 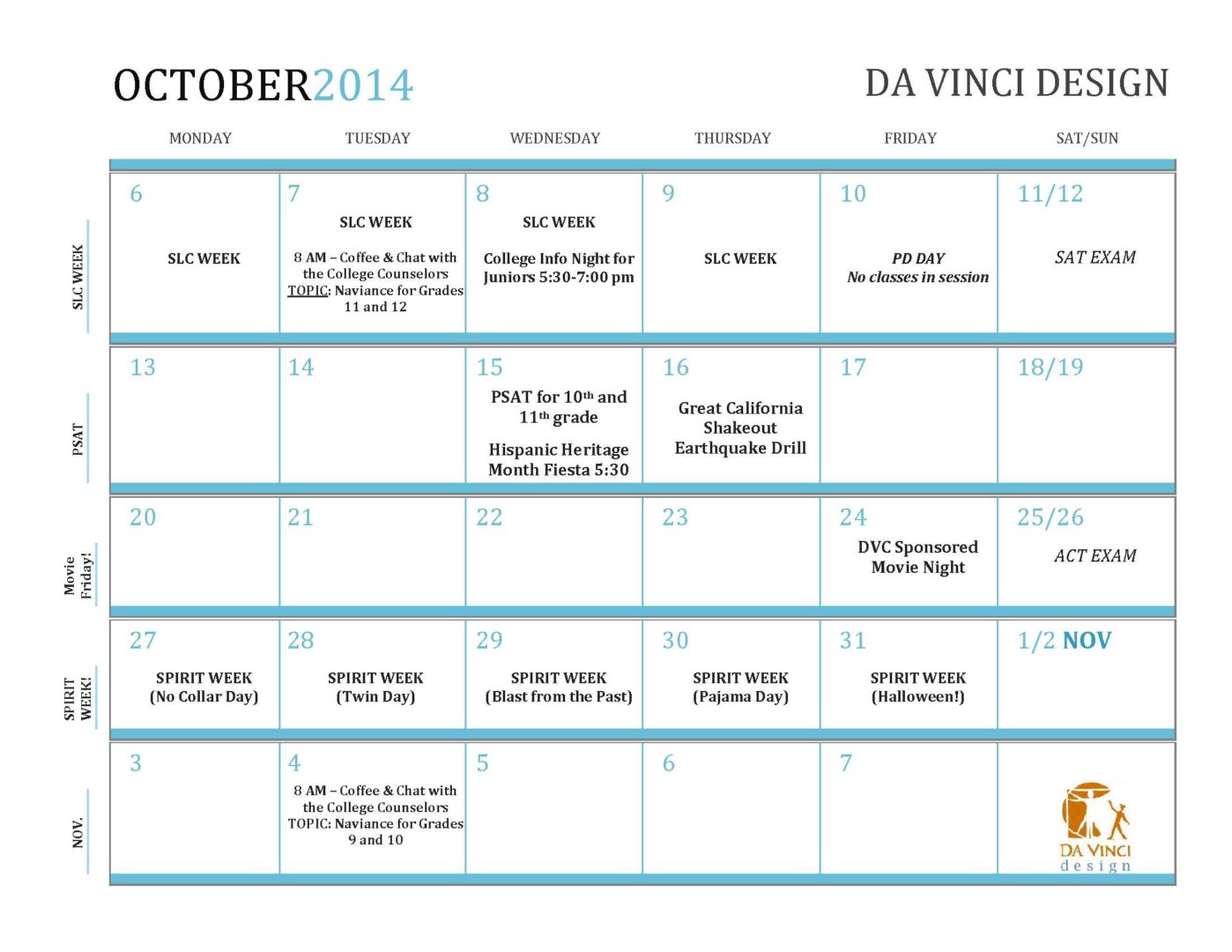 Dana Middle School’s fall carnival “Spooktacular” is currently being planned and they want to offer volunteer spots to Da Vinci kids first. The event is Friday, October 24th and starts at 5 pm, though volunteers can help set up right after school. DV students can take shifts or work all night with clean up, too; it’s fun way to get a lot of volunteer hours.

If you are interested in volunteering or have questions, contact Denise Colwell at djcolwell@juno.com or Ms. Ory from Dana at kory@wiseburn.k12.ca.us. 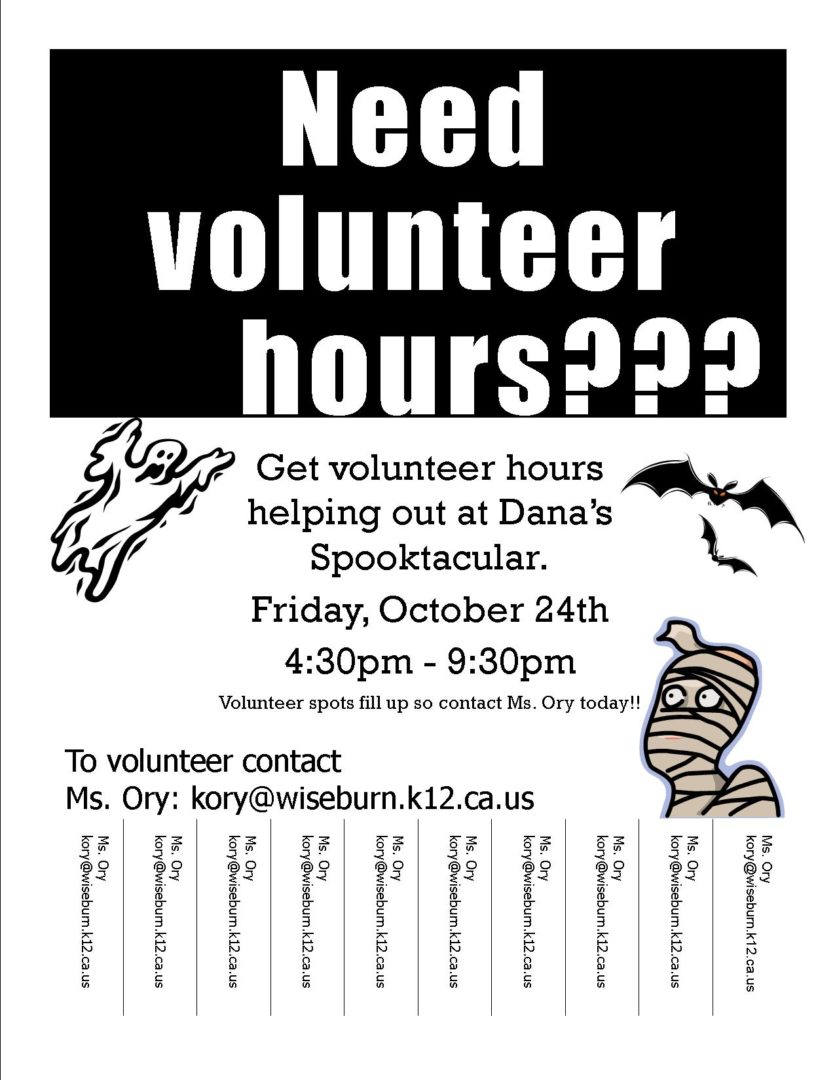 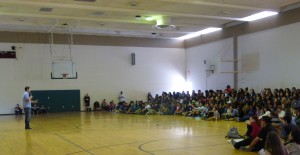 Da Vinci Schools kicked off a career speaker series today with a talk from a digital media expert from one of the nation’s top advertising agencies.

Ben Abt, an Associate Media Director for OMD USA, spoke to about 250 juniors and seniors at Da Vinci Design about his career trajectory. Abt, 34, manages a team of 10 people whose clients include The CW, Smashbox Cosmetics, Universal Studios Hollywood, and the Hawaii Visitors and Convention Bureau.

Growing up in Boston, Abt said his own career trajectory “zigged and zagged” from music to teaching to video game testing and, finally, to advertising. He earned three degrees (including a Master’s degree in math) and went to five colleges in eight years.

“I believe you’ve got to change things up in order to stay motivated,” he said. Abt said that changing jobs frequently is the new normal. He told the students not to be afraid to change careers. “It’s a different world today than it was in the 1960s.”

Abt said the most important thing for new hires is to be competent and reliable. “I want to know that if I a 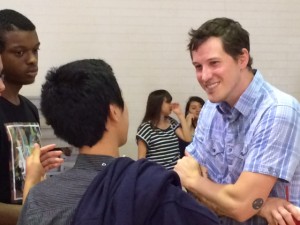 sk you to do something that you’re going to do it.” He also said entry level employees should be proactive, eager, excited and enthusiastic. “Enthusiasm is much more important than what college you went to and what degree you earned.”

Abt, who helps clients decide how to spend their advertising dollars, drew many laughs and high-fives from the audience when he said the advertising industry offers a great lifestyle because employees get a lot of free stuff from clients, can have tattoos, piercings and blue hair, bring their dogs to work, and earn over $100K.

OMD (www.omd.com) is an integrated communications agency delivering media and marketing solutions globally. OMD USA was named the 2013 Global Media Agency of the Year by ADWEEK.

Hello Designers!  Below you will find your Week 8 update with next week’s events, as well as a few “Looking Ahead” announcements. 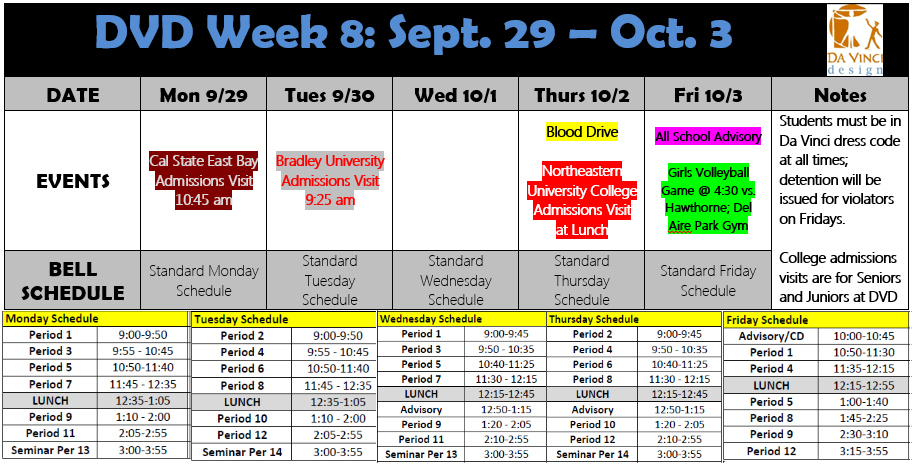 Here’s a terrific way for you to get involved at Da Vinci!

We are always looking to expand our database of real-world connections for our teachers to draw from as they design their projects. If you would be willing to be available as a resource in any area in which you have experience/expertise, we would appreciate it if you would go to the link below and add your name to our experts database so that our teachers may contact you. (It may be as a guest speaker, a connection for a field trip opportunity, or to answer questions and point to resources about the field so that our projects and information are current, relevant and engaging.) We thank you!!

On Wednesday, October 15th Da Vinci Design’s 10th and 11th grade students will take the Preliminary SAT exam. The exam will take place in the morning, during school hours. To prepare for the exam, students will be given study guides and they can also find free test prep through their Naviance accounts.

By taking the PSAT, students may qualify to enter competitions for prestigious scholarships and participate in recognition programs. Please visit the following link for more details: http://www.collegeboard.com/student/testing/psat/about/scholarships.html Scholarships are only available for 11th grade students as part of the NMSQT, National Achievement or National Hispanic Scholars programs. For 10th grade students, it is ONLY a practice exam and the scores will not be officially recorded anywhere via the College Board.

Da Vinci asks that all students pay $14 to take the PSAT (unless they are 11th graders who qualify for free and reduced lunch). They can do so by visiting this link http://davincischools.org/collegepsat.shtml or by paying Maria Beltran in the front office.

If you were unable to attend the Senior College Night meeting last night, please click on the link below to review the presentation.

If you have any college-related questions, feel free to contact the College Counselors:

Greetings Designers!  Below is your Week 7 Update for September 22-26.  A few notes regarding some of the events:

Have a great weekend! 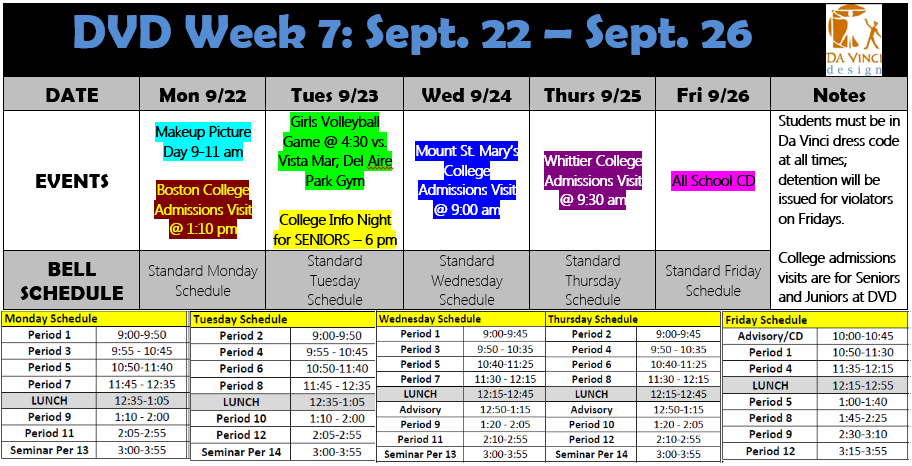 ATTENTION FAMILIES OF STUDENTS WHO HAVE APPLIED TO ATLAS:

If students have applied to ATLAS, hopefully parents or their student have received an email with instructions on how to sign-up for a mandatory parent meeting.

Students/parents that have not received an email and applied for ATLAS, please email Ms. Buckner at mbuckner@davincischools.org.   An invitation to the parent meeting will be handed out to applicants on Monday 9/15 for students to bring home in addition to the email.

Hello, Designers.  We hope you enjoyed your Back to School Night, as well as the Kickback last week!  This week we have a Family Association Meeting on Tuesday 9/16 at 6 pm. The Da Vinci Girls’ volleyball team has a game at 4:30 at Del Aire Park gym vs. Hawthorne High on Friday 9/19.