The Priority Application Deadline for new K-12 families who wish to apply to Da Vinci Schools for the 2014-2015 school year is today at 4 pm. Interested families may complete an online application at: https://davincischools.org/enroll/application.php.

Questions?  Please contact the Enrollment Office at 310-331-8097 or enrollment@davincischools.org.

The first event in the brand-new Da Vinci Speaker Series will be held in exactly 2 weeks. Each month, we will host a parent education night focusing on parent education topics and philosophies, specifically with the Da Vinci student in mind. It is designed to provide opportunities for parents and the community at large to practice life-long learning.

“Stress Management and Your Teen”

Please check out this flyer for more details: Stress Management and Your Teen Flyer

Hi Designers!  Attached is your Week 25 update.  There are no classes in session on Friday 2/28 as we have a staff development day. 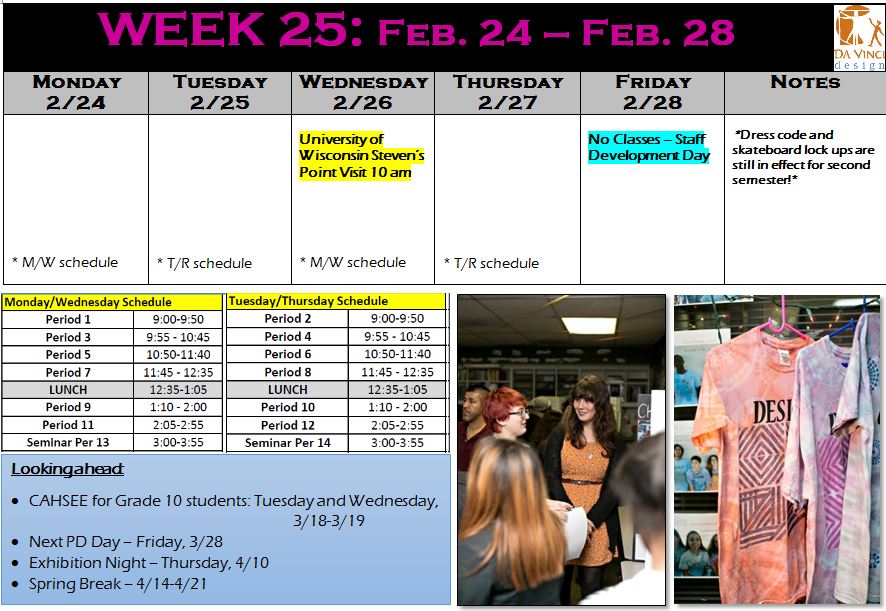 Please click on the link below to see the presentation from last night’s meeting:

“Inspiration is for amateurs; the rest of us just show up and get to work.”

The general public often stereotypes creative people as flakey, carefree spirits who don’t pay much attention to schedules or deadlines. Nothing could be further from the truth. Creative people often exhibit intense concentration, working long hours when they are engaged in a project. In the last three years of his life, Vincent Van Gogh painted more than three hundred paintings, including many of his most famous works. Thomas Edison worked on more than 3,000 ideas for lighting systems before he evaluated them for manufacturing. Joseph Heller completed his novel Catch 22 by writing for two or three hours in the evening, after working at his regular job in advertising all day.

Successful creative people exhibit the ability to stick with a project, even through difficulty and rejection. Susan Cain, the author of the recent best-seller “Quiet: The Power of Introverts” reports she spent seven years writing her manuscript. The first Harry Potter novel was initially rejected by twelve different publishers. While creative people know that sometimes a new idea can seem to appear out of nowhere, they also know that it takes a lot of hard work to take a good idea and turn it into something real.

Daniel Goleman, author of Emotional Intelligence, believes “… concentration is like a mental muscle.” He believes that concentration can be improved with practice.  “Watching ESPN while you work out at the gym,” he explains, “won’t help your brain learn to get better at whatever you’re doing.” Shifting attention between tasks all the time may train the brain to have a shorten attention span.

Practical suggestions for improving concentration include avoiding the use of social media while doing homework. Encourage teenagers to practice focusing by finishing a task all the way to completion. And when you see your student successfully concentrating, avoid the temptation to interrupt them.

Claudia Bear is a Da Vinci parent, with daughters attending Da Vinci Design and the Innovation Academy. She has a background in both science and the visual arts. In addition to practicing optometry, Claudia is a department manager with Kaiser Permanente, where she manages projects, develops leadership training for managers, and serves on the medical center’s Innovation Design Team.

What will be discussed: What colleges look for, graduation requirements, overview of the different college systems, what parents can do now, upcoming events, Q&A

Hello Designers, we hope you enjoyed your long weekend!  Check out this week’s update below:

Senior Families – FAFSA Workshop is available to you on Thursday 2/20 from 5:30-7 pm in Ms. Martinez’s room.  Sign-up with the front office via phone, email or in person.

Freshman and Sophomore Families – College Info Night for 9th and 10th grades is taking place on Tuesday 2/18 at 6:00 pm at the Design campus. 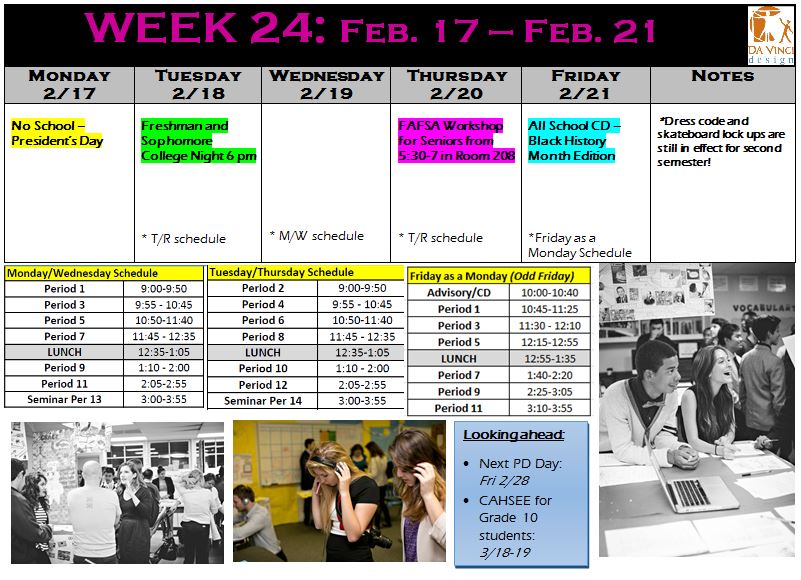 Hello Design families!  Come join our College Counselors this Monday morning from 8-9 am for Coffee and Bagels.  Topic this month: Summer Programs and Credit Recovery.

Students – IMPORTANT YEARBOOK REMINDERS! Remember to buy your yearbooks and vote for using the “Best of Survey” for your grade level under the “Surveys” tab. Seniors – you need to submit your Senior Quotes and Baby Pictures here as well under the “SENIORS!” tab.  Link to all of these is below: 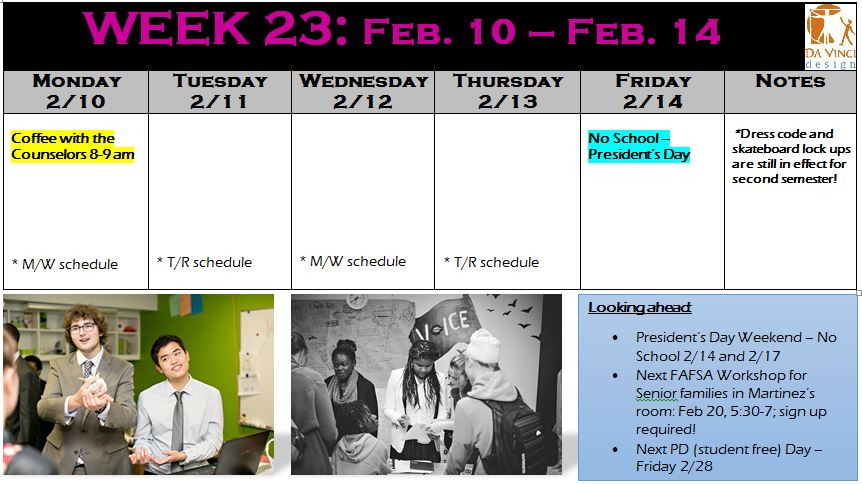 Greetings Designers! We have a fairly quiet week coming up in terms of events.  However, during the month of February a core group of staff and students are planning lots of events and activities for Black History month.  Look out for Morning Announcement Mondays, Music Wednesdays, and some performances/speakers at future Friday Community Dialogues!  If you are a parent or student interested in helping out, contact Ms. Buckner or Ms. Grace-Baker.

Football fans, enjoy the Super Bowl! And for others, maybe just the commercials and/or halftime show 🙂 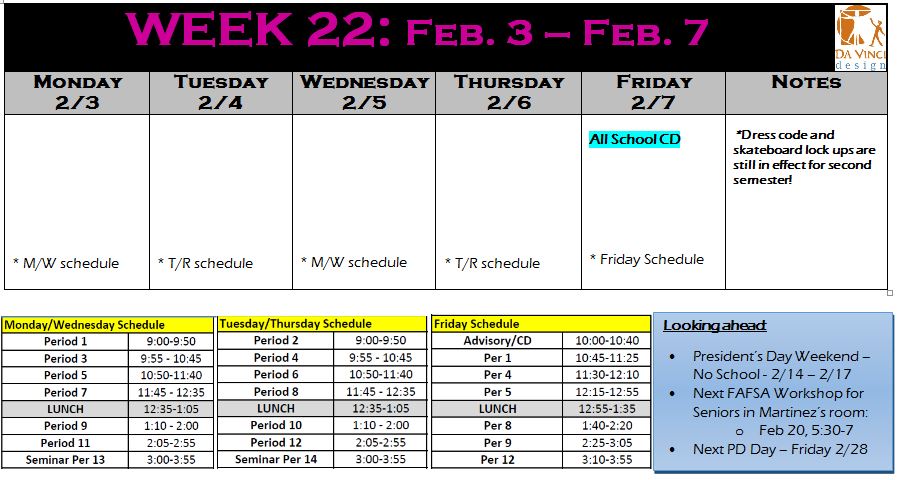